Last night once again I watched the movie “The Patriot” starring Mel Gibson. It’s one of my favorites. I’m not a movie critic so I will not debate the historical accuracies or inaccuracies of the film. The character Gibson plays Benjamin Martin is loosely based upon the lives of some very real Americans like Francis Marion known as the Swamp Fox who fought a guerrilla war against the British in South Carolina and is regarded as one of the heroes of the American Revolution.

Say what you want about Mel Gibson the actor, he might have issues with alcohol and bigotry but the characters he plays in his movies are emotionally visceral, and stir the passions of most audiences. That’s something a good movie should do in my opinion. When I first watched this movie back in 2000, when it came out, it provoked an interest for me in a… 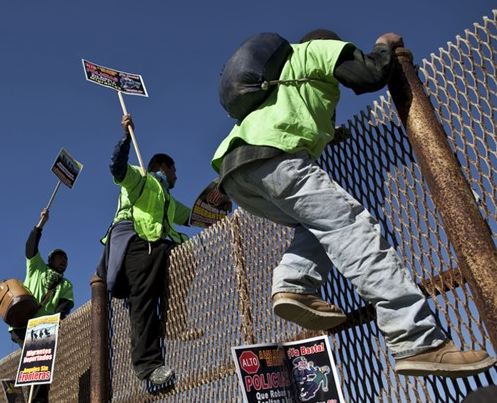 Imagine if someone you don’t know breaks inside your home uninvited and brings with them friends or takes a liking to your daughters. This stranger begins to eat your food, have sex on your couch and gets their friend pregnant or your daughters. This intruder sleeps in your spare bedroom, refuses to work, but if they do they send their tax free money to their homeland. They pretend their one of your family and when they get sick you have to pay for it.

Then after you’ve had enough and you finally call them out on this home invasion they act as if they are entitled to live under your roof and protection, and demand you speak to them in their native language. To make matters worse your dumb retarded brother-in-law thinks they should stay and believes they have the same rights as invited guests.

Yeah illegal immigration is just like this in America today. You wouldn’t put up with it in your house why should America as a nation!

The Future of America

Clinton is as corrupt as they come. The overwhelmingly damning information coming from Wikileaks and the FBI’s agents proves this and could not be any clearer. She will do anything to gain power and the masses who support her are every bit as corrupted in my mind.
Your neighbors, teachers, pastors, relatives, and friends and others who you have trusted for years are going to support a lying degenerate who has a PhD in BS, Graft and Corruption. What’s that say about them? What’s that say about you who associate with them?
There are two America’s within our borders and one of them is trying desperately to destroy the old culture and laws and replace it with their false god Leviathan. I am referring to the over oppressive Administrative State. Think about that the next time you see a I voted for Hillary sticker. We are a divided nation and will continue to be one until we are no longer a nation. No amount of cooperation and compromise will change the very different ideological thinking that exists today. It will only get worse. You cannot make peace with someone who seeks your destruction.

In short we are at the present time in a Cold War with ourselves that will turn hot if only a few things more take place.
The apathetic, ignorant or foolish will reject this but I think it is time to pray hard for peace and understanding, but prepare for war as I think its coming. These two forces cannot co-exist indefinitely. The enemy is in the room with us now not outside our door. We only need to pay attention to the trend towards government control of everything and the patterns of corruption from our leaders and ignorance of the followers to realize it.