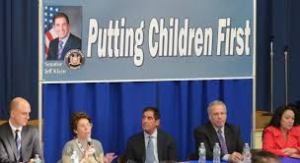 Common Core is but one of many fronts in the ongoing battle of ideas for control of America.  Common Core or Common Core State Standards Initiative originated in 2009 was created by the National Governors Association and the Council of Chief State School Officers with input from teachers, researchers and “leading experts”. According to the Corestandards.org’s web site the standards are a “clear set of shared goals and expectations for the knowledge and skills students need in English language arts and mathematics at each grade level to ultimately be prepared to graduate college and career ready.”

The idea in principle sounds like a good one. Everyone can agree our schools and teachers should be accountable and are children need to be competent in core areas to be competitive in the world market place. Deciding how best to accomplish this task is the challenge.

On one side you have the old fashioned idea that parents and teachers should have a say in what the student’s education should look like based upon that student’s abilities and individual needs. On the other side you have this common held belief among most Progressives that it take a village to raise a child . Like Paul Reville, an education professor at Harvard and former Massachusetts secretary of Education said recently “the children belong to us all” or as MSNBC host Melissa Harris-Perry more ominously revealed “We have to break through our kind of private idea that kids belong to their parents or kids belong to their families and recognize that kids belong to whole communities.” Did you know that? Our children are not our own but belong to the community collective. Maybe I should have just sent my kid’s grocery tab to Uncle Sam. Who knew? It’s funny but I don’t recall my kids ever being assimilated by the Borg or the US Department of Education but perhaps that’s where Common Core is heading.

For the elites like Paul Reville one size does fit all. Just like Obamacare, the individual’s need to keep his healthcare is sidelined in favor of society’s overall need. Common Core is but one example of a fundamental and philosophical difference of opinion. Just who knows what’s best for you and your children? You, or some bureaucrat in Washington?

As Heritage Foundation fellow Lindsey M. Burke recently said “Children belong to their parents – their first educators and the people who have the most at stake in their educational well-being. Accountability is critically important in education, but accountability isn’t achieved by removing parents from the process out of a belief that bureaucrats will make better decisions.”  In addition there has been no meaningful empirical evidence to suggest national standards produce better outcomes. It remains to be seen if all of the states adopt Common Core or something similar. The federal government has offered a pretty big carrot with over 4 billion dollars in Race to the Top grant money for states willing to adopt the initiative. According to conservative political analyst Phylis Schlafy “the common core promoters, whose goal is a national curriculum for all U.S. children despite laws prohibiting the government from requiring it, used the clever device of copyrighting the standards by a non government organization, The National Governors Association Center for Best Practices and the Council of Chief State School Officers. This enables Common Core advocates to force uniform national standards while claiming that the laws prohibiting federal control of curriculum are not violated.”

The folly is failing to recognize that children like adults have different needs and wants, talents and abilities. We may be similar but we are not all the same and one standard does not fit all. Some Common Core’s critics have gone so far as to suggest that Common Core in its quest to standard tests and curricula also seeks to standardize minds, something that’s far from a traditional American value but very much in vogue with Progressives these days. Perhaps they seek to control the classroom as they do most newsrooms.